“The empty institution embodies certain rules not yet accepted in society, but in such a manner that the newly created institution is ineffective. They emerge as compromises over sensitive political issues. The interests opposed to them ensure that they are established in such a way that they cannot achieve their aims. The interests supporting them win a pyrrhic victory as their rules, (…), have no practical impact on social actors’ behaviour.”

The mining governance in China features a dilemma: on the one hand, there are various issues inherent in China’s mining institutions: 1) an outdated nature of the current legislation, 2) ambiguity in the regulations, and 3) administrative fragmentation of responsible authorities. On the other hand, China has witnessed a fast growing mining industry. Therefore, this study aims to explain this phenomenon by adopting the theories and conceptual framework on institutional function and credibility put forward by Ho (2005, 2014, 2016a).  The central question is as follows: How do China’s mining institutions affect the local communities, and to what extent do the rural residents perceive these as credible?

In this study, mixed-method research is performed through three instruments: 1) archival analysis, 2) comprehensive literature review, and 3) empirical fieldwork. The empirical data included survey answered by 352 farmers living in the vicinity of mines in eight counties, and interviews with 29 key informants. 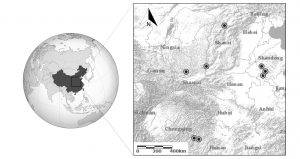 The project concluded that the institutions of mining land expropriation and environmental protection in China have emerged as an ‘empty institution’, of what Ho  describes as an institution that is largely ineffective and ignored, but simultaneously socially accepted and little contested. But the MIDR has become non-credible institutions, which exhibits as lacking of focus on underground mining, national compensation standard, and unclear distribution of the liability at the macro level, and the forced resettlement, high tensions and conflicts, and concerns with future livelihood at the micro level.

The book argues that it is the non-enforcement of mining land expropriation and environmental regulations that are conducive to economic development. At the early operational mining stage, mining activities had contributed as a complimentary livelihood, therefore the farmers would tolerate some risks. When the environmental degradation and land loss does not threaten the livelihood of the local community to a great extent, only a mild reaction is expected. However, there are inherent risks in the empty institution that has a tendency to evolve into a non-credible institution. When the function of access to land as their subsistence was disrupted by land subsidence and ineffective resettlement schemes, the resistance to mining increased. Meanwhile, the institutional arrangements did not provide sufficient protection and sustainable livelihood, the perceived credibility would definitely decrease.

What sets credibility apart from legitimacy?

As stated: “Legitimacy, derived from the Latin legitimare (i.e., to make lawful) inherently bears the connotation to externality and rational agency – either on the part of the governors (who allegedly can actively establish a certain rule), or on the part of those governed (who allegedly can actively change that rule). By contrast, the focus on institutional function rejects axioms of externality and rational agency, as credibility is a measure of how institutions are formed and perceived as a result of autonomous, endogenous patterns of interaction and power differences. See Peter Ho, “The ‘Credibility Thesis’ and its Application to Property Rights: (In)secure Land Tenure and Social Welfare in China”, Land Use Policy, 2014, Vol. 40, September, p. 16.

Read more
Furthermore, although credibility is undoubtedly related to distributional conflict, it does not posit that a “fully credible institution” – if that ever exists – would also be free from conflict. (…) Therefore, whereas legitimacy is perhaps more mono-dimensionally related to social conflict and discontent, credibility by definition presupposes a wider array of indicators by which it could and should be measured, depending on the temporally and spatially determined functions of institutions.” See P. Ho, “The ‘Credibility Thesis’ and its Application to Property Rights”, Land Use Policy, 2014, 40, Sept., p. 16.